Renowned paranormal artist Susan Hiller, who based her work on subjects such as alien abductions, near death experiences and fairy rings, has died aged 78 after a brief illness. Matt's Gallery in London confirmed the news and described her as “a unique and idiosyncratic voice, a great artist, writer, thinker and mentor to many”. Let us take a look at Susan's life and celebrate her.

Susan Hiller was born in 1940 in Tallahassee, Florida. She graduated from the Coral Gables High School in Florida and would obtain her B.A. from Smith College in Northampton in 1961. She would go on to study photography, film, drawing and linguistics in New York shortly before she obtained her post-graduate degree at the Tulane University in New Orleans.

Despite obtaining a degree in anthropology, Hiller would become a critic of academic anthropology. Later, during a slide lecture on African art, she decided she would pursue a career as an artist.

Susan Hiller had several influences playing on her work. Minimalism and conceptual art were some of her earliest influences. She would also state that fluxus, surrealism, and anthropology as major influence on her art.

Even though Susan started to practice art in 1970, she would not have her first art exhibition until 1973. She displayed her art as a part of a group show in London's Gallery House. Her exhibition would give her the nickname 'Hace Possible', which stands for 'make it possible' when translated from Spanish.

During her career, Hiller would draw inspiration from the everyday, but also from valued cultural artifacts and paranormal phenomena. From UFO sightings and fairy rings to horror movies and postcards, they all served as inspiration for Susan's inspirational work.

Hiller did not only have a career as an artist, she also found a calling as a lecturer. During her life, she lectured at the Slade School of Fine Art and California State University.

Much of Susan's work is available for the public to view, although some of her work belongs to the private collection of art collectors. Some of the locations where her work can be viewed include, the Lisson Gallery In London whom we are grateful to receive rights to reproduce her work here, and Centre Pompidou in Paris, The Tate Gallery in London, and the Victoria and Albert Museum in London.

Feew artists have had such and impact on the paranormal scene, bringing it into the art and culture era. Her life and works will continue to adorn the walls of collectors and many will continue to question - what is possible. If you are in London and you are a serious researcher and collector, visit the Lisson Gallery to see her works and other wonderful artists.

Harry Houdini and the afterlife, proof at last? 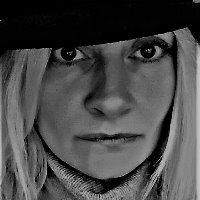